For almost two decades, the Jet Age Museum in Gloucester, UK, has been working on bringing a Hawker Typhoon aircraft back to the city that originally manufactured it. Struggling to find engineering companies capable of recreating the complete brackets from the original 1938 drawings, which were lacking manufacturing details, the museum got in touch with Renishaw.

The Hawker Typhoon — or “Tiffy” as it was affectionately referred to by the Royal Air Force (RAF) — was a British single-seater fighter-bomber manufactured almost exclusively by the Gloucestershire Aircraft Company during the Second World War. The Typhoon was the only RAF plane capable of matching the performance of the formidable German Focke- Wulf Fw 190 at low altitudes. This, along with a sparkling career as a ground-attack aircraft, cemented the Typhoon's place as a national treasure.

Only 3,317 Typhoons were ever made and there are very few around today; none are in flying condition. In 1998, when an almost complete — but exceedingly corroded — cockpit section was found at a scrap yard in Wiltshire, volunteers vowed to restore an aircraft with a rich national and regional importance.

Located just down the road from the birthplace of the Typhoon in Gloucester, the Jet Age Museum is pushing forward with the project today. After hearing about Renishaw's additive manufacturing capabilities, the museum wrote a letter to Sir David McMurtry, Chairman and Chief Executive of the global engineering company. In the letter, the Jet Age Museum asked for Renishaw's help recreating two extremely rare and unconventional brackets for the Hawker Typhoon's fuselage. The Museum was not disappointed with the response.

The museum was unable to locate replacements for the original brackets and had trouble finding a manufacturer who could accurately reproduce the parts. Although the Jet Age Museum did not have the original brackets for the plane's cockpit, it did have some of the authentic 1938 drawings of the parts and was able to borrow the brackets from another Typhoon for a limited amount of time.

After initial planning meetings, Renishaw was confident it would be able to recreate the brackets using its metal additive manufacturing machines. “The Hawker Typhoon is an incredibly important part of Gloucester's heritage,” explains Trevor Davies, Typhoon Sponsor Coordinator of the Jet Age Museum. “Our workshop containing the Typhoon cockpit is less than a mile away from where they manufactured the original aircraft in the 1930s. To bring an original Typhoon back to the city would not only be an incredible engineering achievement, but would be like recreating history.

“We had approached other engineering companies when trying to reproduce the cockpit brackets,” continues Davies. “The unique shape of the brackets meant that although we had the original drawings, CNC machining companies weren't confident they could produce an accurate finished part. When we heard about Renishaw's additive manufacturing capabilities and the design flexibility the technology offers, we got in touch hoping the company could help us.” 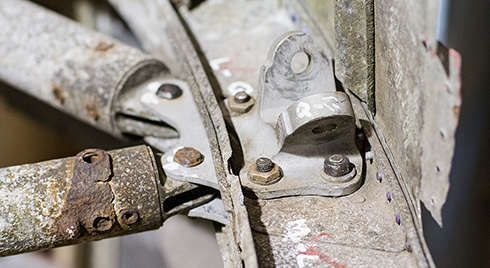 We can't put a price on what Renishaw has done for the Typhoon, the Jet Age Museum and the local community. We would not have been able to reproduce these brackets without additive manufacturing technology — the parts are too unconventional, a little bit like the Typhoon itself. By combining the old and new, Renishaw has helped keep a project started in 1998 alive and well and has brought one of Britain's iconic fighter aircraft back home. 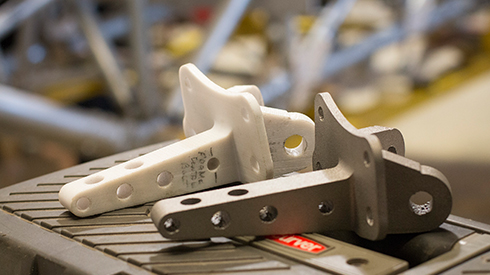 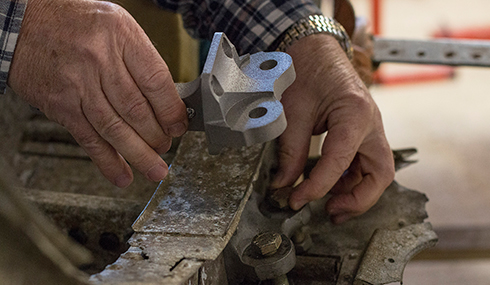 Renishaw used the original drawings and additional measurements to create a 3D digital model of the Typhoon bracket using Siemens NX 7.5 CAD software. This allowed the company to conduct parametric and direct surface modelling to produce digital replicas of the parts.

Once Renishaw completed the digital modelling stage, the engineers 3D printed prototype parts in plastic polycarbonate. Renishaw then delivered these to the Jet Age Museum's workshop and fitted them to the cockpit to make sure they were the right specification. When engineers confirmed the parts were accurate, Renishaw proceeded to additively manufacture the final builds in metal.

The Gloucester Aircraft Company originally made Typhoon cockpit brackets in aluminium. This is because of the metal's physical properties; low density — and therefore low weight — high strength and malleability. Renishaw occasionally uses plastic to additively manufacture prototype parts, before producing the final build in a specified metal with the desired properties for the application.
Renishaw produced the metal brackets from aluminium powder in four separate builds using one of its AM250 additive manufacturing machines; the parts were then surface finished using a mixture of bead blasting and hand finishing techniques.

Based less than 30 miles south of the Jet Age Museum, Renishaw hand delivered the finished brackets in May, 2016. This was just in time for the Cool Aeronautics show, during which the engineering company collaborated with the Jet Age Museum to show off the parts and highlight the benefits of additive manufacturing to the public.

“We can't put a price on what Renishaw has done for the Typhoon, the Jet Age Museum and the local community,” beams Davies. “We would not have been able to reproduce
these brackets without additive manufacturing technology — the parts are too unconventional, a little bit like the Typhoon itself. By combining the old and new, Renishaw has helped keep a project started in 1998 alive and well and has brought one of Britain's iconic fighter aircraft back home. “We regularly hold school talks at the museum, showcasing the aircraft and its importance to local heritage.

With a part of the plane reproduced in such an innovative fashion, we hope to encourage future generations to take an interest in engineering and aeronautics. Additive manufacturing is now a very real part of the Typhoon's illustrious history.”
By taking an additive manufacturing approach to the cockpit brackets, Renishaw succeeded in producing the part to the 1938 engineering drawings, in the original material. Since the successful completion of the brackets, Renishaw has been in touch with the Jet Age Museum about returning another major piece of the Typhoon to Gloucester — the Napier Sabre piston engine. 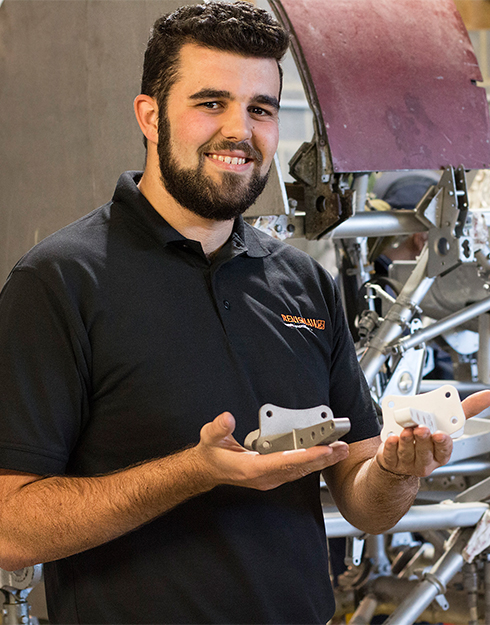