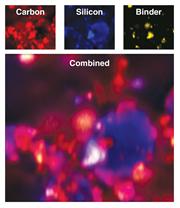 Silicon is attracting much interest as an alternative anode material to the graphitic carbon used in conventional lithium-ion batteries, as it offers up to 10 times the charge and discharge efficiency. However, silicon anodes are not as durable as their carbon counterparts. Research suggests that durability can be improved if the silicon is coated with a thin layer of carbon, and, since both these elements yield characteristic Raman spectra, Renishaw's StreamLine imaging technique is the ideal tool to help in the research.

The Raman images provide valuable insights into the distribution, homogeneity, and structure of the Si-C composite anode particles, which, in turn, can be related to electrical performance. These images can be acquired in a matter of minutes, and without exposing the samples to air, making Raman a strong candidate for QC in situ testing when these new materials go into production.