Renishaw, the global metrology specialist, earlier this year received a Queen's Award for Enterprise 2015 in the Innovation category for its world-leading RESOLUTE absolute position encoder system. This prestigious award follows a rigorous and highly competitive entry process and is awarded only to top UK businesses.

How is the RESOLUTE absolute encoder innovative?

Renishaw's RESOLUTE encoder system won the award by demonstrating a uniquely innovative design with outstanding commercial success over the last 5 years. RESOLUTE is the world's first single track fine-pitch optical absolute encoder and is recognised as leading technology in the absolute encoder market. The readhead captures a near instantaneous image of a coded measuring scale, which comprises a single data track with a non-repeating barcode-like strip of 15 µm wide light and dark lines. Unlike other products in the marketplace, complicated guiding arrangements are not needed to maintain alignment between the readhead and scale, eliminating mechanical hysteresis and measurement errors. 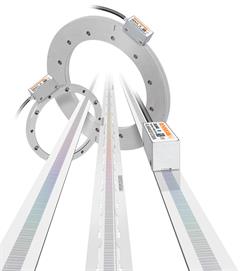 Four of the most innovative features of RESOLUTE's design and production process include:

First is a new imaging based system, rather than a traditional interference-based optical technology, comprising a lens system for the best stability and accuracy of metrology. The readhead uses specially designed custom components including a high reliability point source LED, an imaging lens, a beam splitter and custom 320-pixel linear image sensor capable of 150,000 frames per second. Advantages of this system include rapid position acquisition on demand, exceptional dirt immunity as a result of significant absolute scale code redundancy, low Sub-Divisional Error (SDE) of ±40 nm and low jitter (noise) of 10 nm RMS.

Secondly, novel and fast algorithms for increased safety and position reliability. Two independent algorithms operate within the readhead to compute its position with respect to the scale, giving maximum confidence that the declared position will be correct at all times.

RESOLUTE is available with both linear and rotary scale types and is compatible with a range of ‘open' and ‘proprietary' serial protocols including Siemens DRIVE CLIQ, BiSS®, FANUC, Mitsubishi and Panasonic for connection to a wide range of industry-standard motor drives and controllers.

In rotary (angle) configuration, RESOLUTE is capable of 32-bit resolution at 36 000 RPM or, in linear format, 1 nm at speeds of 100 m/s and lengths to 10 m. This results in better surface finish of CNC machined parts; better scanning and velocity control, and rock-solid servo stiffness on linear motors or rotary direct-drives when holding position. RESOLUTE is now also available in ultra-high vacuum (UHV) and extended temperature range (ETR) compatible variants for advanced applications.

RESOLUTE has CE approval, RoHS compliance, and is manufactured by Renishaw under strict quality controls that are certified to ISO 9001:2008. RESOLUTE, like all Renishaw encoders, is backed by a truly responsive global sales and support network.